August 2, 2013
Mt. Lego VFC has accepted delivery of two new pieces of apparatus. A 2013 Pierce Arrow XT Engine and a 2004/2013 Seagrave Marauder Engine. These trucks will replace the twin 2009 KME Predator engines.
April 27, 2013
The Mt. Lego VFC website is currently being updated, be patient and stick with us while we get everything up to date!
October 2, 2012
In recognition of Breast Cancer Awareness Month, all live-in firefighters are asked to wear their pink Mt. Lego Fire Company t-shirts while at the station and on the call throughout the month of October to promote awareness and importance for fighting for a cure.
August 13, 2012
On August 13th, at 0115 hours Mt. Lego Fire Company along with crews from  Brick Compton, Bricksfield, Bricktree, Brickville, East Mt. Lego, Lake Brickmont, Lego Angeles, Metro Lego, Pequonnock, StuddsVille, and West Brickmont responded to a 4 alarm working industrial fire at the Carrie Blast Furnace located at 3428 Industrial Avenue, which is also a popular tourist attraction and tour site. When crews arrived on scene, the 3 story tall abandon office building that was associated with the blast furnace site was nearly fully engulfed. At 0130 hours, a mayday was called after the Bravo side of the building collapsed on top of a Mt. Lego Firefighter. Firefighter Jesse Thomas was taken to Legogheny General Hospital in critical condition, and is expected to be okay. Firefighter Thomas suffered a concussion, broken back, broken arm, fractured leg, and multiple scrapes, bruises and burns after the side of the building collapsed on top of him. On behalf of the Mt. Lego Fire Company, we would like to thank all of the companies that responded to this incident and kept Firefighter Jesse Thomas in their prayers. The original dispatch can be heard HERE.
July 27, 2012
The volunteers of Mt. Lego have officially ran the busiest month in Mt. Lego history with 4 days still left in the month! The company has responded to 488 Fire and EMS calls since the beginning of the month, and nearly 20 calls a day. Within these 488 calls, 15 of them have been Box Alarms. A lot of these calls also came from the storms that have recently rolled through the area.
July 19, 2012
The members of Mt. Lego Fire Company are once again staying busy operating numerous calls with a severe storm on its way in. They are currently working multiple wires-down, fire alarms, car accidents and flooded basements.
July 16, 2012
Numerous updates and changes to the website will be taking effect in the next 24 hours. Bare with us while we work on the website!
July 12, 2012
The members of Mt. Lego Fire Company are keeping themselves busy so far this month with multiple Structure Fires, numerous Medical Calls, and so on. So far this month, the boys and girls have responded to 74 calls. On average about 6 calls per day. Keep safe and have a happy July!
May 7, 2012
Mt. Lego Fire Department, Bologna Fire Department, and Bruceville Fire/Rescue responded to a Residential Structure Fire in Mt. Lego's Zone 1-B this morning. Mt. Lego Engine 8462 arrived on scene of 9931 Coastal Blvd. to a 2 story brick structure with heavy fire showing from the windows and front door. Crews quickly made a interior attack, and had everything under control within 20 minutes. Pictures from the fire can be found by clicking the button below.
5/7/12- Structure Fire
March 20, 2012
Lots of updates have been occuring in Mt. Lego the past few months. During the borough meeting this evening, the attention was brought to Chief Crowder about airport expansions expected within the next few months to a year. Still in the planning stages, the airport is planning on building a larger terminal on the grounds, or expanding to their current terminal. There is also talk of having an Air Force Wing added to the airport. With these being brought up, it was brought to attention that Fire Department coverage for the airport would need to be updated. The Fire Department is working for a grant to order two new Oshkosh Striker 3000 crash trucks, along with other smaller units such as a brush truck, a foam engine, and a ladder truck. These plans might not go through, but the Fire Department is ready to add on if needed.
March 19, 2012
Mt. Lego Fire Company would like to thank MedLink Amulance Service for donating 13 SurgiVet Pet Oxygen Mask's to install in all Mt. Lego Fire Apparatus Medical Kits. The kit inlcudles a Large, Medium, and Small face-peice. These masks are designed to provide supplemental oxygen to animals suffering from respitory distress, smoke inhalation, or for general recovery from anesthesia. The masks are used on animals by general and specialty veterinary facilities, emergency referal clinics, and fire and rescue departments. Once again, a big thank you to MedLink Amulance Service for donating the new equipment! 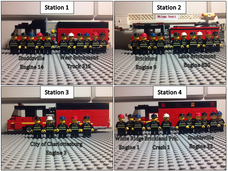 Click to make larger
March 17, 2012
On behalf of the Mt. Lego Fire Company, we would like to thank the crews from Brickford, City of Charlottesburg, Studdsville, West Brickmont, Lake Brickmont, White Ridge, and Brickland Park for covering all of our stations during our annual Fire Company Banquet. The crews responded to many calls throughout the day including: 23 Medical Calls, 5 Automatic Fire Alarm's, 4 Motor Vehicle Accidents, 2 Box Alarms, 1 Working Fire, and 1 Aircraft off the runway. Once again, we would like to thank them for showing the brotherhood of making long hauls out here and working hard throughout the day.
March 12, 2012
The Fire Company has accepted a $20,000 Grant from the Borough to puchase Opticom systems for all Mt. Lego Apparatus. The company is planning on buying 18 Opticom Model 492H Emitter's for the apparatus, coming out to about $17,000 total. Plans to install the receivers on all traffic lights in the coverage area are currently being installed.
March 8, 2012
It's been a stressful beginning of the month for the crews in Legogheny County. County has decided to switch over to a new numbering system. Mt. Lego is now Station 46, instead of Station 232. Any apparatus calling on the air must add an 8 in front of the unit number. Ex: Engine 4 responding would be "Engine 8464"
February 16, 2012
Lots of updates to the site, such as the Homepage, Area Map, Run stats, and Call of the Week 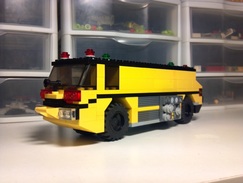